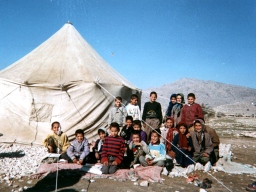 The point of the Thoroughbred analogy of last week is that God is a mighty God and always at work in mighty ways: “…more than we can desire or ask for,” as Cranmer wrote in one of his collects. We call the unharvested fields “unreached,” and maybe they are by us, but they are jealously loved by God.

The profile this week is of the Qashqa’i of Iran, a non-Persian group near the Zagros mountains of Iran.  They were one of the world’s least evangelized peoples in the 1990s with no pastor, no verse of Scripture, and no known Christians. Here are five times that the Thoroughbred of heaven showed his power to the Qashqa’i of Iran.

1. Unity. I worked with the early team concentrating on them. We consisted of five different agencies: one from each of the two Southern Baptist agencies, Wycliffe, the Friends, Korean Presbyterian, and Anglican/Episcopalian. We were: clergy, dentist, linguist, doctor, and one had the distinction of having won a blue ribbon in his state fair for his beer recipe. (No, not me, though I did brew at one time and definitely would not have received a blue ribbon for my batch.)

Not only were we across the board in background, but we got along very well. At one of our meetings, the Quaker said, “Tad, you all baptize by sprinkling. You Baptists dunk. We Quakers don’t baptize at all. It will be great to see how the Holy Spirit handles this.”

2. Extraordinary miracle. These stories must be verified, for they invite exaggeration. This story was told to me about the Qashqa’i. A later source said it occurred with a different non-Persian group. I will present it as I first heard it.

A group of missionaries were distributing copies of the Scriptures in a city near the Zagros Mountains. No one seemed interested. They decided to go towards the Persian Gulf and find other villages. On the way their jeep broke down on a bridge. They looked up and saw a man wearing a Qashqa’i hat coming down the mountain to their jeep.

This man was part of a Qashqa’i village. The men there had been meeting and discussing parts of the Qur’an. They all said that Isa (Jesus) gets lots of attention, but no one knew much about who He was. That night one of the men had a dream. In the dream a man appeared to him and told him that if he would go down the mountain to where the road goes over a bridge, he would get information about Isa.

The next day, as he approached the men in the jeep, he said, “I have come to find out who Jesus is.”

3. Conversion. The Feast of the Transfiguration, August 6, 1996, as the date when the first Qashqa’i came to faith. He was living outside of Iran when he met the Lord. Later one of our workers went to visit him, taking with him recording equipment. When he left about a week later, he had with him a tape of the man’s conversion, key words used for translation, a reading of Luke for an early version of the Jesus Film—all in the Qashqa’i language–and an experience he said was the best seven days of his life.

4. Translation. The linguists on our team were not from the US, so they could enter Iran. The husband went alone to visit a Qashqa’i camp. On his way, his driver stopped the car and proceeded to beat him up and take his possessions.

A Qashqa’i leader saw this and intervened, saving the linguist. So embarrassed was the Qashqa’i man that the Muslim code of hospitality was blemished (cf. Lev. 19:33,34) he brought the linguist into the camp, and they all treated him as honored guest. He kept his notebook handy as he innocently asked about their words and grammar. That information was fed into a Wycliffe program for a similar language and saved over eight years of translation of the Qashqa’i Bible.

5. Sacrifice. The convert returned to his village after his conversion. He risked his life for telling of his faith in Jesus Christ. Nonetheless he did tell his family, and soon he was leading a small group of people studying the Bible.

6. Who knows? Those events occurred at least a decade ago. Of course there have been more developments. God is at work, and we may be certain that the might and the love and the truth of the God and Father of the Lord Jesus Christ continue to lift His name for those Qashqa’i who will worship Him in everlasting joy.

This brings me to a welcome update about the Bagri, the people I profiled two weeks ago. From the research I had available, I wrote that there was no translation for them and no known agency working among them.

I was happily corrected by two readers. One wrote that he and his agency had been working with the Bagri for over ten years. He said there are 80 small house churches among them, an ordained pastor, and ten deacons.

The other writer works with the Jesus Film. He wrote that the Jesus Film has been made in the Bagri language along with one other Bible film.

Our calling is to go where God is at work. The unharvested fields are also places where God is mightily at work, jealous for His glory. If we ask how we can join Him there, we will receive.

This trip accompanies several of the friends of St. Paul. We will eaves drop on their correspondence, look into their lives and ministries, and find some insights about what they were doing. I suspect that much of what we see will surprise us, some will challenge us, and all will fill in some spots of God's work then and now.
View all posts by Tad →
This entry was posted in Gentile nations. Bookmark the permalink.